Chrystal Zajchowski attended Science Camp in 2014 just before entering her senior year in high school. In 2016, after completing her freshman year at the University of Massachusetts at Amherst, Chrystal returned as Science Camp’s first counselor-in-training. Just before starting her sophomore classes, Chrystal took some time to write to me about her Science Camp experience. With her permission, I am sharing it here. Thanks for sharing, Chrystal! 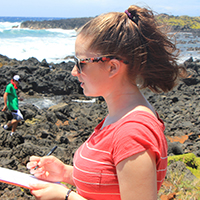 This summer, I had the opportunity to be Science Camps of America’s first counselor in training. I was a camper two years prior and that experience was like no other, with trips all around Hawaii to the Imiloa Astronomy Center, the Keck Observatory Headquarters, Volcano National Parks, and even to Black Sands Beach. I knew I wanted to come back, I just didn’t know how. I was the oldest camper that session by two years, so it was hard to fit in with the younger campers. Finding myself talking to the counselors and spending most of my time with them throughout the camp, the counselors and I believed a new position should be made.

The next summer, it was made known to me that the position was made. Just my luck, I was too busy getting ready for college and I could not take advantage of the opportunity. My first year of college, I was having some difficulties in my physics class, so I thought that astronomy wasn’t for me. I had carefully thought about what other majors would interest me, or what else I could see myself doing, but nothing prevailed. I researched the astronomy major at the University of Massachusetts Amherst, where I study, and I found out that there are different ways to get your astronomy degree that didn’t have to be a Bachelor of Science degree in Astrophysics. Changing my track to a Bachelor of Arts degree in Astronomy, I found that I can study what I really love and not be as stressed out. I thought that at Science Camps of America, I could talk to scientists and science teachers to make sure that this is what I wanted to do. 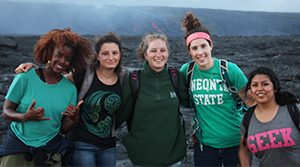 Finally, keeping some time for science after a long first year as an astronomy major at UMass Amherst, I boarded my flight to Hawaii. This summer has been an amazing learning experience for me. I always knew it would be, but it was much more than I expected.

Learning how to deal with teenagers and learning how to work with other adults at the same time was just the start of it. So much science was learned as well from determining the salinity of the Waiopae Tide Pools, to realizing that the constellations are something I need to know to be a better astronomy teacher in the future. 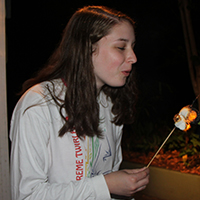 Chrystal working on her s’mores technique.